During dinner last night, my wife, Ayako, suddenly asked, “Do you want to celebrate life tomorrow?”

I was taken by surprise. “You remembered?!”

“Of course! You think I would forget?”

How could she not forget? I put her through hell nearly one year ago. My attempt was on August 24, and I never came home that night. I had fallen asleep in my car and awoke the next morning after totaling my car.

Ayako had no idea where I was or what had happened to me. For all she knew, I was dead somewhere. I always called her when I would be late or if I had to stop somewhere. For her not to hear from me at all, and then having to go to bed with all those questions and fear in her mind must have been excruciating.

It turned out that she and my two little boys went driving around looking for my car on the side of the road all night Friday. Ayako called every hospital on the route between our home and my campus. On Saturday, still without hearing from me, and without a word from the police or hospital, she kept the appointment that we had made for the Lowe’s Build and Grow Workshop. My sons love going to the free clinic where kids can build their own wooden toys. She even took the kids to the park afterwards which was what we always did. Later, I learned that Ayako didn’t want to break up the routine and risk upsetting our boys.

The thing is, after she knew that I was alive (I had answered the phone in my drugged state without saying much), it pained her even more that she didn’t have any details whatsoever.

Anyway, I never expected Ayako to bring up the anniversary of my suicide attempt. This weekend, we refer to it as Celebrate Life Day after she had coined the phrase the night before.

We were at Lowe’s again this morning for another Build and Grow Workshop. The Halloween displays were out, probably just like last year when Ayako brought the kids by herself. Since my oldest son is now seven and able to express himself more, I asked him a question. “Do you remember last year when the Halloween stuff was out and daddy wasn’t with you when you built that Shrek onion carriage?” None of us ever spoke about that tragic time; we just wanted to put it behind us and move on.

He thought about it for a moment. “No, but she didn’t feel good because she didn’t know where you were.”

That was all I needed to know.

We celebrated life by having lunch at my favorite sushi restaurant. Again, out of the blue, my wife turned to me during lunch and said with a smile, “I’m really glad you’re still with us.”

“Oh, I am, too. I’m sorry for putting you through all that. I wasn’t in my right mind.”

I don’t know if we’ll continue the tradition of Celebrate Life Day. Maybe not, I would guess. But we sure had a great time today. 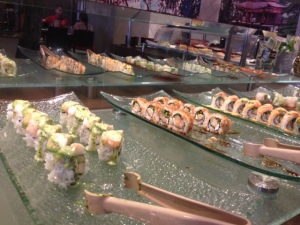 I'm a college teacher, writer, and faithful Catholic. I do my best to juggle all of these while dealing with my mental illness -- a constant thorn in my flesh. END_OF_DOCUMENT_TOKEN_TO_BE_REPLACED
This entry was posted on Saturday, August 24th, 2013 at 6:00 pm and tagged with children, depression, family, helplessness, life, love, marriage, mental illness, suicide, suicide attempt, sushi, tragedy and posted in Inspiration, Mental Illness, Suicide. You can follow any responses to this entry through the RSS 2.0 feed.
« Into the Abyss
The Sorrowful Mysteries »