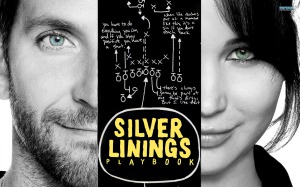 And if you say to me tomorrow, oh what fun it all would be.
Then what’s to stop us, pretty baby. But what is and what should never be.
–Led Zeppelin

Lately I don’t want to write unless there’s something totally pressing on my mind.

I started watching the first 30 minutes or so of Silver Lining Playbook. I haven’t looked into it, but it seems like it’s billed as a nice romantic comedy. Well, the first 30 minutes was enough to trigger all sorts of feelings in me. (The movie was released in 2012, so that shows how “hip” I am regarding pop culture.)

The main character, Pat (played by Bradley Cooper), is bipolar, and his father (played by Robert DeNiro, a nice surprise since I only knew Cooper was in the movie) has issues to a certain extent such as OCD and anger.

I had to stop watching after the scene where Pat was having flashbacks of assaulting his wife’s lover while the soundtrack played “What Is and What Should Never Be” by Led Zeppelin. Ironically,  Zeppelin happens to be my favorite band of all-time, and their songs and mystique have weaved themselves throughout my life since I was in middle school.

I’m not criticizing this movie (I’ve only seen the first 30 minutes); on the contrary, this post is just a half-hearted rant about wanting to see a basic romantic comedy between two people who suffer from various mental issues — and instead being subjected to scenes from my own darkest days in a theater from hell.

I’ll probably continue watching the movie now that I know what to expect — and deal with the triggers as they come. How wise is that, though? I don’t know.

Wow, I started watching during my lunch break, then I had class, and now I’m back at the desk, and it’s still with me — or maybe it’s because I’m still writing this post. However, this movie definitely hits home because Pat is so much like me — heck, the story is so much like mine.

(By the way, at the beginning of the movie, Pat is at the psychiatric hospital wearing a hooded sweatshirt with strings. Those strings would be the first things to come off when one is admitted to such a facility, along with shoe laces.)

I don’t like to write reviews. I don’t consider myself qualified to inform people about such things as movies. Books, maybe.

So consider this an anti-review.

I'm a college teacher, writer, and faithful Catholic. I do my best to juggle all of these while dealing with my mental illness -- a constant thorn in my flesh. END_OF_DOCUMENT_TOKEN_TO_BE_REPLACED
This entry was posted on Thursday, October 16th, 2014 at 5:40 pm and tagged with anger, bipolar, Bradley Cooper, domestic abuse, Led Zeppelin, mental illness, OCD, Robert DeNiro, romantic comedies, Silver Linings Playbook and posted in Books, Domestic Abuse, Drugs, Family, Marriage, Media, Mental Illness. You can follow any responses to this entry through the RSS 2.0 feed.
« A Terrible Day for Two of Us
Picture-Perfect Catholic Couples »