Living Our Lives For Christ

What makes a person happy? What makes life worth living?

We all know the answer: not at all. There is only one thing – or one person, to be more exact – that can make us happy, and that’s Our Lord Jesus Christ.

This is the only way to understand what the women described below decided to do. Even with worldly success, they gave it all up to follow Christ in a more focused way in the religious life.

Of course, you can follow Jesus without joining a religious order. Some of us are called to go into business, to work in the entertainment industry, to have families, etc. But some are called to the radical religious life – and they remind us of what’s really the most important. 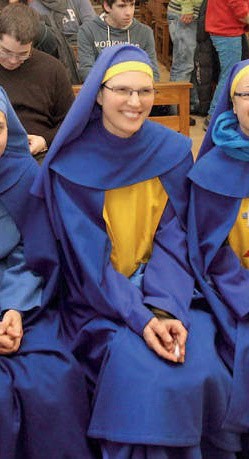 Olalla as a nun

Olalla Oliveros was a successful Spanish model, starring in movies and advertisements throughout the country and the world.

Then she visited Fatima, Portugal, the site of the famous Marian apparition to three children there in 1917, and had what she later described as an “earthquake experience.” She says she received in her mind the image of herself dressed as a nun, something she said she initially found absurd.

But she couldn’t get the image out of her mind. She eventually concluded that Jesus was calling her to give up her glamorous life and become a nun.

“The Lord is never wrong,” she said. “He asked if I will follow him, and I could not refuse.”

She is now a member of the semi-cloistered Order of Saint Michael. 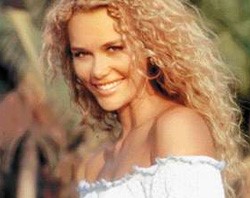 Amada Rosa Pérez was one of Colombia’s most successful models before she disappeared from the public eye. Then years later, she re-emerged to explain her absence: she had had a religious conversion and was working with a Marian religious community (though she had not become a nun).

At the height of her career, she was diagnosed with a disease that made her lose part of her hearing. The diagnosis led her to question her lifestyle:

“I felt disappointed, unsatisfied, directionless, submerged in fleeting pleasures… I always sought answers and the world never gave them to me.”

Now, she regularly goes to Mass, goes to confession, prays the rosary, and prays the Divine Mercy Chaplet.

“Before I was always in a hurry, stressed out, and got upset easily. Now I live in peace, the world doesn’t appeal to me, I enjoy every moment the Lord gives me.”

She also has re-evaluated what it really means to be a “model”:

“Being a model means being a benchmark, someone whose beliefs are worthy of being imitated, and I grew tired of being a model of superficiality. I grew tired of a world of lies, appearances, falsity, hypocrisy and deception, a society full of anti-values that exalts violence, adultery, drugs, alcohol, fighting, and a world that exalts riches, pleasure, sexual immorality and fraud.

“I want to be a model that promotes the true dignity of women and not their being used for commercial purposes.”

These wonderful ladies ought to be an inspiration for the rest of us. No, you don’t have to become a nun or a priest to follow Christ to the best of your ability. All you need is a heart for God and He will do the rest, blessing you along the way and growing you into the man or woman that He envisions you to be.

We all have the same potential, so let’s strive to live a life of faith through action. If you indeed take that step, God will bless you beyond comprehension.

I'm a college teacher, writer, and faithful Catholic. I do my best to juggle all of these while dealing with my mental illness -- a constant thorn in my flesh. END_OF_DOCUMENT_TOKEN_TO_BE_REPLACED
This entry was posted on Thursday, August 31st, 2017 at 10:28 am and tagged with Amada Rosa Perez, becoming a nun, Christ, faith, inspiration, Olalla Oliveros, Spanish models and posted in Catholic, Christianity, Inspiration, Media. You can follow any responses to this entry through the RSS 2.0 feed.
« And There Was War in Heaven
My Friend of Misery »

2 responses to “Living Our Lives For Christ”