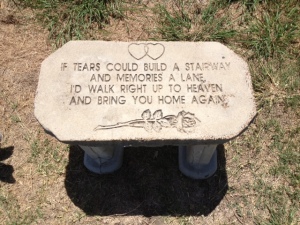 A bench in McGregor (Texas) Cemetery

My sister flew down from Missouri this past weekend. My kids were excited for her to visit because, when any of my family members come, my boys receive “presents.” My sister, Kay, always has fun visiting.

However, this was no ordinary visit.

For the past two years, Kay and I had been talking about driving down to McGregor to visit our aunt’s grave. We kept mentioning it but never made time for the trip. Finally, the stars and planets aligned, so we chose this past weekend for our road trip.

Actually, our aunt died three years ago, but not a single family member knew about it until Kay’s 2010 Christmas card to our aunt was returned to her. Baffled since our aunt had lived in McGregor for ages, Kay did some online investigation and discovered that our aunt had passed away back in March of the same year.

You see, my sister was the only family member who had kept in touch with our aunt and sent Christmas cards to her every season. (Kay has a big heart, obviously much bigger than mine.)

You may be wondering, Why did no one keep in touch with her? Well, my grandfather ruled our family with an iron fist. A shrew self-made multi-millionnaire, he wielded incredible influence and power; we lived in fear of him, referring to him behind his back as The Godfather.

Years and years ago, my aunt met a man and ran away with him to Texas, where they eventually settled in a small quiet town called McGregor. “Leaving the family” against my grandfather’s wishes, he severed all ties with her, excluded her from the will, and told us never to contact her again.

The only memories I have of her have faded a little: going to her house with my mother for coffee; playing with her big, furry dog; rolling around on her shag carpet like I was in the woods; and her trademark cackling at everything we kids did.

So my sister and I were glad that the day had finally come. Only a few hours away from where I now live, our biggest regret was that we hadn’t visited her while she was alive. By traveling there and paying our last respects, however, I believed it would comfort her lonely soul and put a smile on her face as she looked down upon us. 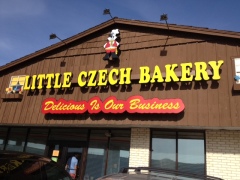 The fresh bread in this Czech town of West always reminds us of our heritage and the kolache that our great-grandmother used to make.

It’s always exciting to take a road trip, especially with a friend or family member. My sister and I are only three years apart, and we have been growing closer as we get older. She suffers from bipolar disorder and a troubled marriage like I do, so it would be the perfect chance for us to, in essence, be counselors for each other.

I made a playlist on my iPod of various dance/pop/R&B songs for the road trip, and we loaded up my car with a cooler full of bottled water (Texas summers tend to be pretty brutal). We set off in good spirits with the music creating a cheerful background as we chatted and took in the landscape of rural Texas.

I told my sister as we left the metro area that everything we were doing reminded me of the movie Stand by Me: Although the purpose of our quest was a somber one, we would have fun along the way, make a few detours, and enjoy each other’s company. Lifelong memories would be formed.

One humorous moment was when we stopped at a small Mexican restaurant along the way for lunch. Kay ordered a margarita since she wasn’t driving, and the waitress asked to see her ID. Having been given such a compliment, my sister quickly gave the waitress her driver’s license. The waitress looked at it and said in a disappointed tone, “Oh. You’re not from here.” She walked away with Kay’s driver’s license without saying another word. My sister and I exchanged puzzled looks. Ten minutes later, though, my sister was happily sipping her strawberry margarita.

Later, as we rolled west on highway 84 toward McGregor, I started to get butterflies in my stomach. This is it, I thought. I hope we find the grave. All we had to go on was what our aunt’s former landlord had told us; nothing on the Internet helped us at all. The city cemetery didn’t have an address or phone number.

Loose gravel crunching beneath the tires, we pulled into the cemetery.

No map. No office building. Just what we expected.

One thing we didn’t expect, though, was the size of the cemetery: It wasn’t a little podunk scrap of land that we had imagined. Rows and rows of headstones and memorials in all shapes and sizes stretched as far as we could see.

St. Eugene Catholic Church in McGregor. I had planned on lighting a candle inside for Aunt Lois, but a wedding was taking place.

We quickly found out that there was no organization whatsoever that we could perceive. Gravestones from 1882, 1910, and 1963 were intermixed with ones from the 21st century. Our hearts sunk and reality hit us: We would have to park the car and roam around in the 103-degree (39 C) heat until we found it. Well, Aunt Lois, I thought, we’re definitely thinking of you now. There was no one to ask for help; we were the only ones in the cemetery.

Kay took one vast side of the cemetery, and I took the other. Our iPhones in our hands like walkie-talkies, we began the search. My sister soon texted me: This is like a game. Kinda fun! I smiled.

We both got caught up in pausing before interesting gravestone/memorials. Each one told a story by the engraved pictures, words, and items placed in front. This distracted us from our true mission, but we didn’t mind. I couldn’t help but set vases of flowers and teddy bears upright as I came across them. I apologized out loud before touching these precious items, though. I wanted to do it out of respect, but, at the same time, I felt like I was invading the peace and tranquility of the departed souls.

I prayed in this spot on the church grounds before we drove to the cemetery.

My heart fluttered in my chest. We had texted up until now (don’t ask me why), but she was now calling me. I answered.

Yep. Just as I thought: She had located the grave.

I jogged toward my sister who was standing way back at the far end of the cemetery, not far from where I parked the car (ugh). On our way into town, we had bought four different kinds of plastic flowers at Dollar General because we wanted them to last longer that just a couple of hours.

We planted the four sprigs in diamond formation around the small but gorgeous headstone. I suggested that we have a moment of silence. (I didn’t want to use the word pray because my sister is definitely not the praying type.) I bowed my head as my sister respectfully gazed down at the flat rectangular stone.

In silence, we got back into the car and drove along the gravel trail back to the entrance. Suddenly a thought came to me: We didn’t waste the past two hours wandering under the fiery sun. Aunt Lois had no family and very few friends when she died. To her, the past two hours were like an afternoon of coffee and chit-chat with her niece and nephew in the run-down apartment complex that she called home.

All I know is that Kay and I were the only family members who had made the trip to pay our last respects.

I imagined Aunt Lois smiling and seeing us off at the entrance, her hair in the same beehive style that I remember.

“That was a nice visit,” Kay said as we slowly drove away. 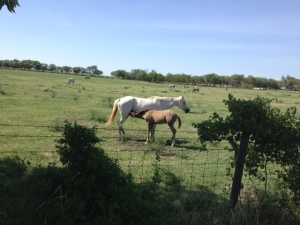 The Circle of Life: We saw these horses directly across from the cemetery as we left.

(all photos by Topaz)