An Antisocial Outcast in God’s Temple 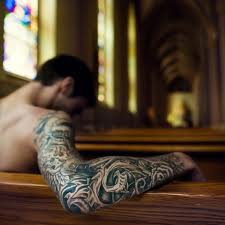 Today is Sunday, so that means 8:30am Mass! Ask any Christian, and they will say that Sunday is their favorite day of the week: Mass/service, fellowship, hanging out, lunch together…

Don’t get me wrong; I go to weekly Mass and my soul actively participates in worshiping God. It is an exhilarating, mystical experience. By the end of Mass, I sometimes have tears of joy and gratitude streaming down my face.

Believe me, I want to hang around afterwards and chit-chat with people; laughing and smiling is good for the soul. I just have trouble making my body… um, do that.

During the Mass, there is a moment when we greet and shake hands with parishioners around us (No, it’s not some awkward trend that happens only in Evangelical churches). I know exactly when it is coming: shortly after the Our Father and before the consecration of the Eucharist. Since I know when it’s going to take place (think of Bill Murray’s character in Groundhog Day), I dread the moment and wonder each time how I will manage to get through it. Will someone ignore me? Will a husband smooch his wife and then turn to someone else, leaving me out (not that I want to be smooched)? Or will an old woman scowl at me while offering a limp hand?

“I knew this was gonna happen.”

Last week, I have to confess that I did something different for the first time and unbecoming of a Catholic and Knight: During the meet-and-greet part, I clasped my hands in prayer, bowed my head, and shut my eyes tightly. I could hear the greetings die down, so I knew when to open my eyes again and rejoin the Mass.

I know. That was bad. I won’t do that again. Luckily I wasn’t wearing my white K of C name badge. Just like people who put the Christian fish symbol on their car: They are expected to be polite drivers. If not, then it’s full-on scandal mode featured on the nightly news or something.

Right after Mass (*not during), I retreated to the safety of my car and tweeted about how lonely I always feel sitting by myself each week. I even try to avoid smiling at kids in front rows who turn around to look at me, afraid that I would be seen as a pedophile (you know, big tall nerdy guy sitting all alone in church, smiling at kids). (I am not a pedophile by the way.) (Man, I just realized I use a lot of parentheses.)

I mentioned in my tweet that I wished our parish had a section of pews where solo churchgoers could sit; we would feel more secure perhaps. Well, Topaz, um… Why don’t you go sit by someone who is alone?! Duh! Because it’s hard, and I am afraid that they would consider that a weird request: “Hi. I don’t want to look like an idiot, so can I sit by you?”

Anyway, this wonderful Twitter follower of mine responded with: “Jesus was alone in the garden while He struggled with his emotions. Lean on Him.” Wow. That is awesome.

I immediately went back into the chapel (the church was emptied out by this point) and knelt in front of the Blessed Sacrament. I spent some good time there before the tabernacle in the semi-dark chamber lit by gorgeous white candles along the walls with the single red one that symbolizes the presence of Christ.

God always speaks to me in some way — usually in a barely-audible whisper that comes from the far reaches of my soul. He told me basically to take my beatings as I go. He reminded me that, in just a few hours, I would be going over to the grand knight’s house to prepare the food for our pool party to honor the altar servers in the parish. Then God reminded me again — I’m such a blockhead — that I needed to get going because, being the council youth director, I was the one leading this whole event and I had work to do.

(By the way, I didn’t become the K of C council youth director and an officer because I’m so awesome. It’s because nobody else wanted the job.)

So, in essence, God’s reply to my loneliness and anxiety was to get over it and focus on others. Later in the day, when the pool party was in full swing without any major disasters going on, I thanked God for helping me through yet another episode of my depression and anxiety.

So, this Sunday turned out to be the best day of my week. Not because I’m such an important Super Christian ™ and born to mingle, but because I remained faithful through all the pain and torment of my illness.

Hopefully all of you reading this had a good day. If not, there’s always tomorrow.

I am not a trained psychologist or therapist, but if you feel all alone and need someone to talk to who understands, please leave me a message or contact me at: thepsychword@gmail.com. Seriously.

*I sometimes think people are blatantly texting or surfing the ‘net on their smartphones, but they could be following the order of the Mass and the readings instead. So it’s probably not the best idea to assume they are the bane of your existence.