Just Before I Go: A Must-See for All of You Who Are Like Me 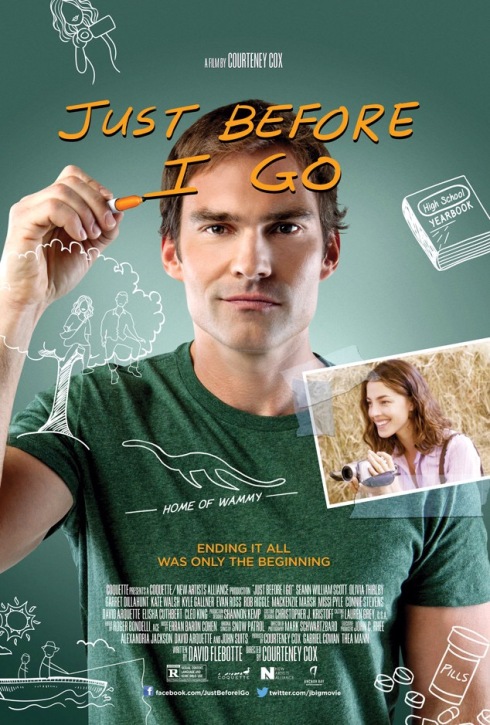 I was at Target recently with my sons to look for a Lego Batmobile set (which, my youngest learned in horror, had since been discontinued). While the kids were playing games on iPad demos in the store (How they quickly forgot about Batman), I took a look at the newest DVDs on a nearby shelf.

Not surprisingly, none of the titles rang a bell since I practically live under a rock. However, one title caught my eye: Just Before I Go. The actor’s melancholy expression and the tag line, Ending It All Was Only The Beginning, led me to believe that it dealt with suicide. Sure enough, I flipped the DVD over and read the synopsis. Sounded intriguing.

There was only one problem: Seann William Scott. Really?! He plays a total idiot in all his movies. Nevertheless, I jotted down the title in my iNotes (or whatever it’s called) to watch it at some point.

Tonight was the night. Friday after work. Wife and kids gone. Amazon rental. A nice bowl of Lucky Charms for dinner. I was set. I can always turn it off when the flick gets juvenile, I thought.

Not an Oscar contender by any means, but it was GOOD. All the poignancy that I was hoping for.

I even started blubbering like a baby when Scott’s character met his deceased father on the lake during a near-death experience.

The movie is about a man who, before committing suicide, goes back to his hometown to confront some painful childhood memories “just before he goes.” I don’t want to reveal too much, except that this is not a screwball comedy. It tackles several thorny issues effectively I think.

Bottom line: If you are feeling depressed or even suicidal, do yourself a favor and watch this movie. Do it for me even. Screw what the film critics say about the film. They get paid to tear things apart.

I loved the Emerson quote at the end:

When it’s dark, that’s when you can see the stars.

Just look up and they will always be there.