In the Trenches: Teaching Students Who Don’t Seem to Care 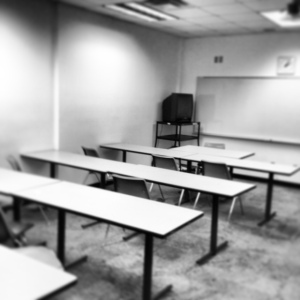 They say not to write an email and send it if you’re angry. I think blogging is an exception; most of my posts are fueled by emotion anyway.

No matter how well I start my day — reading and studying Scripture, praying, listening to soothing music — it always seems to go downhill anyway. Today is a case in point.

I took my meds, had my morning cup of coffee, and spent about 15 minutes (all I can afford on weekday mornings) in meditation and reflection after studying a Bible passage. I’ve been wearing my Miraculous Medal recently to remind me that I’m not alone in my daily struggles. The commute went well. I listened to some songs by John Michael Talbot, one of my favorite Christian artists.

But then it was time for class.

This morning I taught developmental English. It’s the last step before students take college-level English, colloquially referred to as “freshman comp.” You would think that developmental students would be motivated by the fact that they’re essentially on their way to beginning their core curriculum studies.

Only two out of my twenty-five students had attempted the homework that was due today. It was an important assignment to help prepare them for a major essay two days from now. Seeing as nobody cared — only about half of the class bought the textbook — I told them I wasn’t going to waste my time discussing something that they weren’t prepared to discuss.

I wanted so badly to say, What are you fools doing here?! This is a community college, meaning it’s easy as hell to get accepted, easy as hell to afford, and the professors here actually care about you, unlike the big universities where you’re just another face in the huge lecture hall.

Get the hell out if you don’t want to be here! Companies always need janitors, and McDonald’s will hire anyone with a pulse. Don’t you care about your future, you idiots?!

But I didn’t say that. Rather, I told them I was very disappointed and that some of them would receive a rude awakening at the end of the semester when I post their grades.

Luckily I took a Xanax this morning along with my other meds because I’ve been struggling again with suicidal ideation. Had I not taken it, who knows where I would be right now. Maybe out of a job. Or in jail.

At the end of class, I gave back the final drafts of the students’ essays from last week. I hate doing this because it stirs up mutiny in the classroom. I can’t make it out of the class after the scheduled end time since everybody wants to know why they scored so low. Um, did it ever occur to you to learn the grammar of your mother tongue?  You expect a passing grade when your supporting paragraphs consist of three sentences each?

Here is an interesting exchange with a student after returning her essay which she had plagiarized:

Student: Hey, why did you give me a zero? (Yes, college students address us as Hey. Lovely, isn’t it?)

Me: Well, because you cut and pasted from the Internet.

Student: But, on my first draft, you told me to add more details.

Me: True. But that doesn’t mean you can steal one-quarter of your essay from WebMD.

On my way out of the building, I crumpled and threw away progress reports of five students who didn’t bother attending today. It didn’t matter, though. All five were full of zeros.

I found a place to sit under a staircase at the entrance of the building. Afraid that I would explode at the first person I saw, I took some time to cool down.

Sometimes desperate prayers are the most effective. I prayed like crazy not to lose my temper or to kill anyone. (I’m a devout Catholic, but I struggle daily with my illness and sinful nature.)

I am now back in my office, but I don’t feel any better. I wish I had a best friend to talk to right now.