As a flesh-and-blood male, pornography is something that I struggle with — even as a faithful Catholic. So many times, I feel like St. Paul must have felt. I plead with God to take away this load of bricks from my shoulders, but He gives me the same response: “My grace is sufficient for you, for my power is made perfect in weakness.” (2 Corinthians 12:9)

Huh?! What the heck does that mean, anyway?  Why don’t you speak in simple, straightforward English, Lord? Because I’m an idiot and I need for you to be clear. I want answers, darn it!

Then I’m reminded of that final epic chapter in Job where God does indeed answer Job’s complaints about Him. So, maybe I’m better off with the enigmatic response that St. Paul received.

There are some good resources out there for men and women who struggle with purity and pornography.

I will be the first to tell you: I am no better than any non-Christian. Shoot, I can probably name numerous atheists who do better at holding to good morals than I do.

But we Christians need to keep striving to imitate Christ and to get this stuff out of our lives.

Dudes, ladies, I ain’t here to condemn you. When God looks down from heaven, he see all of us as sinners. I’m no better than anyone else reading this measly little blog.

And I mean that.

Oh, how I would love to tell you about my life before I got serious about practicing my faith. Heck, if I were to tell you about some of the stuff I struggle with at the present when I fall into sin, you would stop visiting this blog right away.

Yes, I’m rambling; I tend to do that when I get emotional about an issue. Please forgive me.

Anyway, here are just a few stats from that study over at Covenant Eyes:

9 out of 10 boys were exposed to pornography before the age of 18.

The first exposure to pornography among men is 12 years old.

71% of teens hide online behavior from their parents.

6 out of 10 girls were exposed to pornography before the age of 18.

15% of boys and 9% of girls have seen child pornography.

32% of boys and 18% of girls have seen bestiality online.

39% of boys and 23% of girls have seen sexual bondage online.

70% of wives of sex addicts could be diagnosed with PTSD.

56% of divorce cases involved one party having an obsessive interest in pornographic websites.

There are awesome resources at XXXchurch that include accountability groups via videoconferencing, accountability software, and other stuff. Unfortunately, the guys at XXXchurch take a lot of flak from Christians for the name of their site. I say, hey, whatever gets peoples’ attention. “Let he who is without sin cast the first stone.” (Jesus)

These aforementioned sites are Protestant (hey, we’re all on the same team).  A good Catholic resource can be found here.

OK, to change gears a little bit: Last week was my monthly Knights of Columbus council meeting. It was the first meeting in which I attended as an officer since the new fraternal year began July 1. (Proof that there is a God! Just a few years ago, there was no way that I would ever have been nominated and elected as an officer in a Catholic fraternal order.)

I brought up the topic of accountability partners because I haven’t seen anything like that at my parish. The typical pew-warmer tends to be lazy (hence the term pew-warmer), so I took it upon myself to initiate the idea. Again, this is something so unlike me; not only am I a pew-warmer, but I’m a wallflower as well.

Anyway, as I was afraid of, I received a pretty indifferent response from the general members as well as from the other officers. Dejected, I vowed to go to the parish priest and ask him for advice on how to initiate this much-needed accountability program.

I was vaguely aware of the hall becoming empty as I chatted with brothers about their issues as well as mine. However, sitting in a corner of the hall, in semi-darkness, was a very prominent member. What was he doing? He usually had to rush out directly after the meetings because of his busy schedule.

This was someone who I barely spoke to because his time seemed reserved for the “important” people. For him to wait and humbly admit this to me in an empty K of C hall really blew me away. “I’ve got your number. Can I text you?” I asked.

I went home that night to my little prayer closet — they’re not just for Evangelicals anymore  — and just sat before the crucifix, electrified and humbled. Electrified because God was using a mental, introverted fool like me, and humbled because some of the most important men in my council and parish were now looking to me for a way out of their spiritual bondage.

St. Augustine, pray for us! 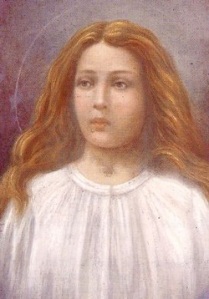 St. Maria Goretti, pray for us!